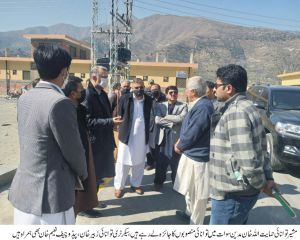 Advisor to Chief Minister Khyber Pakhtunkhwa on Energy and Power Himayatullah Khan expressing displeasure over slow-pace of work on 84 Megawatt Matiltan hydropower project, Swat on Friday issued suspension orders of its project director.
The energy adviser has also ordered authorities concerned to submit an inquiry report about causes of the delay in the project within seven days.
He issued these directives while visiting ongoing energy projects in Swat district.
He was accompanied by Secretary Power and Energy Muhammad Zubair Khan and chief executive Pedo Engineer Muhammad Naeem Khan. 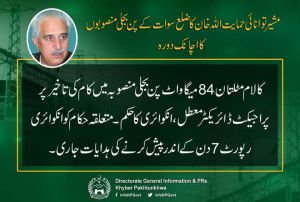 The adviser was briefed about various matters pertaining to these projects and was informed that 88 MW Gabral Kalam project would soon be launched with financial assistance of the World Bank.
Several meetings were held with the local population to acquire land for the project and high officials including commissioner Malakand, DIG Malakand besides other officials attended these meetings.
On this occasion, Commissioner Malakand assured that land issue would soon be resolved and work would commence on the project soon.
He added that work on construction of the Power House colony would be inaugurated at the earliest.