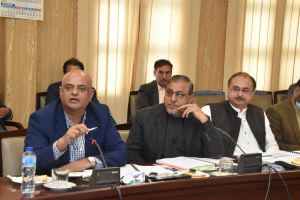 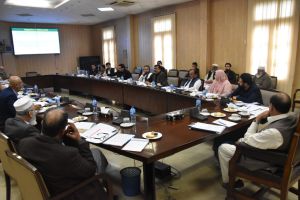 Briefing about the ongoing hydel power projects under PEDO, it was informed that work on other four important projects were also in progress including 84 MW Mataltan Hydro Power Project, 69 MW Lavi, 10 MW Chapri Charkhel and 6.5 MW Barando Hydro Power Project which would be completed at a cost of Rs. 22000 million, Rs. 20087 million, Rs. 4378 million and Rs. 4195 million respectively. On completion, these projects are expected to generate an annual revenue of Rs. 6 billion cumulatively.
The forum was also apprised of hydro power projects being executed through foreign aid in the province and was told that progress was underway on 300 MW Balakot Hydropower project,88 MW Gabral Kalam and 157 MW Madain Hydropower project which would be completed at estimated cost of Rs. 85 Billion, Rs. 39 Billion and Rs. 82 Billion respectively. 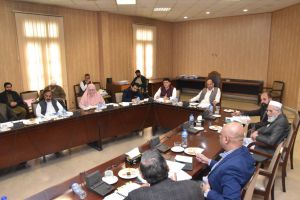 Briefing about the Mini Micro Hydropower projects of PEDO, it was informed that under the first phase of the project, a total of 328 feasible projects were identified out of which 281 Mini Micro Hydropower projects have been completed so far. “Under the second phase of the project, progress on a number of new Micro Hydropower projects was underway”, it was told and added that Project Management Consultants have been hired for the construction of 317 Micro Hydropower projects on streams in Malakand and Hazara Divisions, and 43 Micro Hydropower Projects on Canals in other parts of the province. Similarly, under the solarization projects, seven various schemes were in progress. under the project solarization of 4000 mosques in the province, 2956 mosques have been solarized so far whereas solarization of remaining mosques would also be completed by June next year with the total estimated cost of Rs. 2.4 Million. It was informed that work on 13 solar mini grid station in merged areas was also in progress. This project would be completed by June 2022 with the cost of Rs. 757 Million. Besides consultant has been hired for the solarization of mosques and other worship places in merged areas. The project would be completed by November 2022 with the total cost of Rs. 450 Million. It was further informed that under the project “solarization of 8000 schools and 187 Basic Health Units”, 6983 schools and 134 Basic Health Units have been solarized so far whereas solarization of remaining schools and BHUs would be completed by the end of next month. Total cost of the project was Rs. 4.3 Billion.
Talking on the occasion, the chief minister directed the concerned Commissioners and Deputy Commissioners to clear all the matters related to acquision of land for Balakot and Kalam Hydropower Projects within a month further directing that the land after clearance be handed over to concerned department without any delay. He directed the authorities of Energy Department to complete all the pre-requisites and arrangements for the ground breaking of Balakot Hydropower Project by the end of next month adding that Prime Minister Imran Khan would himself perform the ground breaking of this important project. He directed the quarters concerned that preference be given to local people for the recruitment against non-technical positions for these Mega Hydropower Projects. He also directed the PEDO authorities to immediately initiate practical work on the second phase of Mini Micro Hydropower Projects and take necessary steps to ensure implementation of the projects as per the stipulated timeline. He said that the provincial government was working under integrated and well devised strategy to utilize the available potential of Hydropower in the province aimed at meeting the energy requirement at provincial level and creating job opportunities for people as well.
admin2021-11-24T05:29:45+00:00
Go to Top