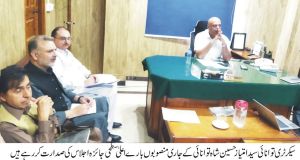 a Energy Development Organization (PEDO) a subsidiary of Department of Energy & Power, GoKP is working hard to generate affordable hydropower in the Province generation Rs. 32 Billion in revenue for the Province. It is the largest revenue generating agency with annual revenue of Rs. 5 Billion and is currently generating 161 MW of cheap electricity which will be increased to 224 MW next year.

PEDO has also solarized 4440 Masajids, 8000 Schools and 187 BHU’s in the Province. 13 Mini Grids have also been constructed to promote commercial activities in the newly merged areas.

In addition to hydropower and solarization, PEDO has also completed 302 Mini Micro hydropower stations in the backward reas of the Province through which 29MW of cheapest eectricity is being provided to the poor people at the village level.

Secretary Energy & Power Syed Imtiaz Hussain Shah expressed his satisfaction over the progress made on thr ongoing projects of PEDO and hoped that the completion of ongoing projects would prove to be a game changer for overcoming power crises and stabilizing the economy.