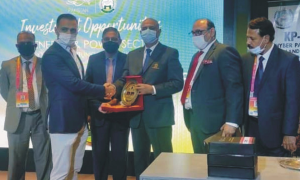 Secretary Energy & Power Department, Khyber Pakhtunkhwa Syed Imtiaz Hussain Shah said that domestic and foreign investors showed great interest in the energy sector at Dubai expo and agreed to invest in this sector. During his visit to the expo, he said that the provincial government was implementing investor friendly policies and providing maximum facilities to them under one window operation. He said that the energy department has become a revenue generating entity in the province by generating 5 to 6 billion rupees revenues annually, adding that during the current fiscal year the department would increase hydel power generation capacity from 161 MW to 212 MW that would help generate Rs 10 billion annually.